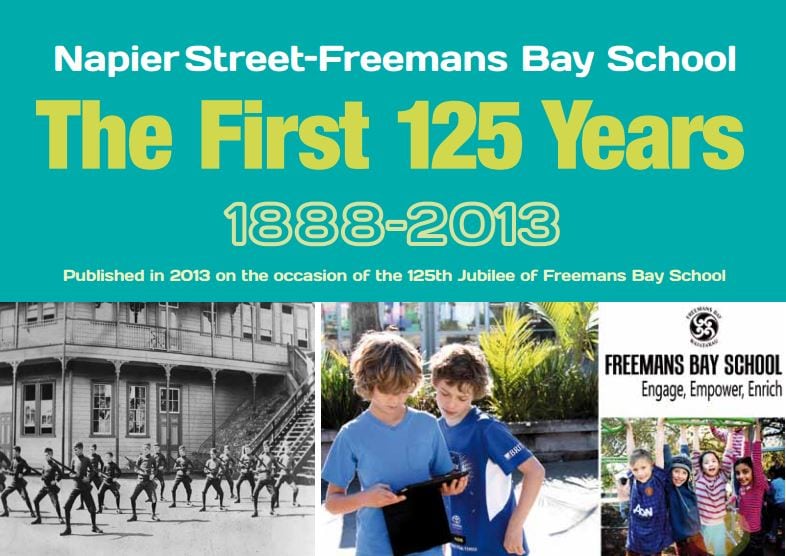 In 2013 the school celebrated its 125th jubilee and published a booklet which contains a brief but fascinating history of the school since it opened in 1888.
Download the booklet here.

Freemans Bay is one of the oldest neighbourhoods in the city. Originally it was open to the harbour, but that access was restricted with the building of the council destructor on what is now the site of Victoria Park Market.

The quality of housing in the area followed the topography of the land. The upper slopes of Freemans Bay reaching to Ponsonby Road contained better and more durable housing, The flat had more jerry-built cheap dwellings many of which were eventually demolished.

Freemans Bay suffered harshly during the influenza epidemic at the end of World War One, and as a predominantly working class community experienced the brunt of the Depression. In the 1940’s and early 1950’s there was a significant Māori population, a reflection of the major migration that took place from rural areas into the city, The Maori Community Centre in Fanshawe Street flourished and regular dances and social activities took place there.

In the 1950’s, as Pacific Island migration began to increase, Freemans Bay became a major point of entry into the New Zealand community. In the late 1940’s political pressures grew in the city for a slum clearance programme. As a result Freemans Bay was designated in 1950 as the first reclamation area under the Housing Improvement Act. This gave the Auckland City Council considerable powers to take properties compulsorily and demolish housing, and provided access to government loans and funding for replacement buildings.

It was intended at the time to increase densities in the area, so that the population would increase to about 12,000.  In 1945 there were about 10,500 residents in the area. After the ‘scorched earth’ policy of the planners, the establishment of a 70 acre industrial block, and motorway construction, the population in 1988 was about 4000.

The early results of urban renewal were damaging to Freemans Bay: a decrease in the housing stock, the shattering of a working-class community and the inability of many of its members to remain in the area.

It was not until 1968 that the Auckland City Council reversed its total clearance policy, and began to focus on the rehabilitation or renovation of housing.
In 1988 Freemans Bay was a mixed community. There were large numbers of Auckland City Council houses and flats. But the private sector rental market had been declining. The predominant trend was gentrification, as landlords sold their properties to owner-occupiers, and a new class of professional and business people moved into the neighbourhood. This trend has continued to the present day.

Evelyn Marshall was at Napier St School from 1912 – 1916 with Mr Carter as headmaster. It was a round building that she remembers which had the infant and the standard schools combined and during her school years the concrete infant block was built.

Gardens were made on the high side to beautify the bank and on the arbour days they planted the trees that border on Napier St. There were no uniforms in those days, but the girls wore mainly loose fitting pinafores with large collars and most girls had long hair.

In the netball team she played the jumping centre because she was so tall and in the playground they played hopscotch and tiggy. There were art and sewing classes, but because she wasn’t much good at these she recalls teaching the smaller children arithmetic.

Richmond Road school was where they held the cooking classes, and it was at one of these classes, her Cornish pasties were so bad that she was sent back to Napier St, but because she was her class teacher’s pet, he took her back to the class and made her stay. After this episode the cooking teacher always gave her the dirty jobs and never liked her.

School assemblies were either in the hall or in the playground, and the Xmas concerts were at the Hibernian Hall at the top of Wellington Street where she remembers a friend called Kitty Brown who always danced the sword dance. It was at one of these concerts she remembers being a rose, and she wore a white frock with a red sash. They were in a group and the song went:

“The rose, the thorn, the thistle
and the shamrock shall entwine
All bound together to make
The long red line…”.etc

Her best friend was Elsie Oakes who lived in Vincent St and they enjoyed going on picnics to ‘Pine Island’ (now Herald Island). They would walk to the wharves and catch the Bradney and Binns boats, it was a full day’s outing and lots of fun. Evelyn’s younger sister Ruth also attended the school and commenced in the primers and went right through to standard 6.

Living at 66 Napier St they both went home for lunch and Evelyn remembers that her Dad had the first motorcar in the street and also their home was the first in the street to have electric power. She recalls that at night everyone would come outside to watch the “Marshalls” put their lights on. In these days the school would have used gas for heating and lighting.

Evelyn, aged 87 in 1988, was really pleased to be able to share these memories with the school.

The following is an extract from the Freemans Bay School Centennial Celebrations booklet 1888 – 1988.

“It was the time of the 2nd World War, a time of blackouts, trenches dug with sandbags around, food and clothing rationing. Air raid shelters were built in the school grounds, and all pupils had a cotton bag around their necks containing a cork, camphor and a whistle.  Fortunately these were never needed.  There was much excitement on the day in 1945 when the war ended. I remember so well hearing the hooters from the boats in port and the ringing so loud of the school brass bell. We were allowed to bang and jump on our desks and make as much noise as possible before being sent home for the rest of the day.”

Auckland is at COVID Alert Level 4 until 11:59pm on Tuesday 21st September, when we will move to Level 3.

School will be essentially closed at Level 3, apart for those families who have no alternative care for their children, and have already registered their attendance with us. Remote learning will continue until the end of term on Friday October 1st. Please keep checking your emails for updates.